My Grandma D used to exchange handwritten letters regularly with her childhood best friend, Janette. Even after they grew up and moved away from one another, they continued to send snail mail. I found a rose-colored crayon in my grandmother’s belongings once. When I asked about it, she said she used it to write to Janette sometimes. The crayon was a special way that they both would decorate their letters to one another.

Of course, my grandmother lived in the time before the Internet, before email, before text messages. And as I think about it now, I doubt she ever touched a computer. I don’t even remember her ever using a typewriter, although I’m sure she probably did on occasion. During the last year of her life, she lived with my family, and I can’t even remember if we had a computer anywhere in the house at that time (this was 1992).

I’m a lot like Grandma D. I have her personality (I’m a people pleaser, and sometimes I’m naive to a fault). I’m also a letter writer, but the difference is that I do live in the age of the Internet and emails and text messages. Sure, I send a lot of those, but there’s just something about paper and pens and pencils and stamps and finding that letter in the mailbox. Nothing electronic could ever compare.

(For long-time readers of my blog, you may recall this post about how I sometimes mix my love of tea and my love of letter writing.)

Last week, while attending my monthly writers group meeting, I learned of a new tool online that’s specifically meant to increase letter writing offline: www.writeoncampaign.com. As the “About” section of that website explains, “Write_On is a mission-driven campaign to promote joy, creativity, expression, and connection through handwritten correspondence.” I’m in love! Before clicking that link, I didn’t even know that April is National Letter Writing Month. How did I miss this? Next April, I will definitely take on the challenge of writing one letter every day as the website encourages.

In my excitement, I took to social media to share my fortuitous find, and the response has been intriguing. First, two friends commented: “Where’s my letter?” Fair question. So, I said I’d get one out in the mail to each them the very next day (and I did!). One of those friends actually promised to write back. I think the other was just teasing me, but if I ever open the mailbox and find a letter from her, I will be thrilled. Then within an hour of posting that message, two more friends suggested that we become pen pals. And to round out the responses, another friend texted to ask for my address because my post inspired her to write a letter to me.

I have to admit that when the first two responses came in, I began to think that my idea of posting on Facebook had only increased my workload with no letters coming to me in return. But actually, I’ve realized that somehow my love of letters and snail mail has opened some interesting new doors. I don’t have a childhood friend named Janette to send letters to, but thanks to Facebook, I now have several new pen pals offline. How’s that for irony? I wonder what my grandmother would think of these new and old forms of communication melding together. I actually think she’d love it. She was pretty cool like that.

My grandmother also had another habit when it came to sending snail mail. If she was sending a card (birthday cards, Christmas cards, any kind of card with a printed message already inside), she would underline the words that she particularly wanted to emphasize in the message. And yes, I’m my grandmother’s granddaughter, and I do that, too. Underlining on the computer? Just not the same. I’m grateful for technology, but sometimes I’m even more grateful to grab a pen or pencil and a piece of paper, and just write. 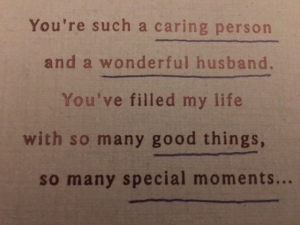 This is a card I gave to my husband for our anniversary. Notice the underlines (to me, the most important parts!).

2 thoughts on “The Time-Honored Tradition of Writing Letters”